Dionysos in the Woods

It was the 30th anniversary of my birth, a new moon, and a solar eclipse (albeit not visible in this part of the world) all in one day.  It seemed like an auspicious time to follow an oracle from Dionysos to "go to the forest."
I went alone, to an area whose energy is dear and familiar to me, though finding a place where I might have some solitude without hiking too much was difficult.  I had precious little daylight to work with by the time I reached the place, since this was only a day trip.  I settled on a place not far from the road but out of sight, with a steep hill next to a creek.  Offerings in tow, I hiked down, over the water and then up.  My plan was to get over the hill or to the top of the hill, but this proved impossible.  It was steeper than I thought, and my step was still unsteady from my still-healing foot. 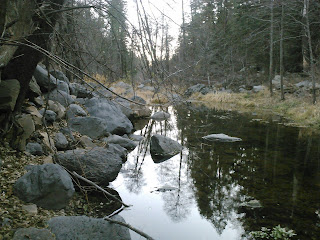 A little more than halfway up the hill I had to stop.  Left with little choice, I picked the oldest, most impressive looking pine tree in the immediate vicinity and sat with my back to it and the creek so I would not slide down.  The sun and I were in just the right position for me to see all the normally invisible, now illuminated, strands of spider webbing in the trees and brush before me.  On the rising ground in front of me I fashioned an altar from a piece of tree trunk and put forth the various offerings I had been told to bring: eggs, a phallos, wine, flowers. And for my head, a crown that I fashioned of floral lights and ivy for an Ariadne costume a couple years ago, that has since had a permanent place on my shrine.  The sensation of gravity pushing me into the support of the old tree, with the sharply rising ground and the setting sun in front of me, was a strange one.  But I felt secure and secluded. 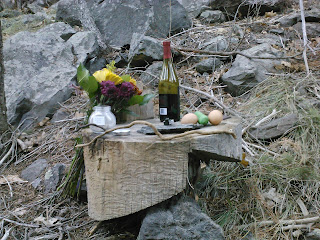 I called on Dionysos.  I immediately felt the fullness of this place--just how much is going on both visible and invisibly, in constant vibration.  I poured out wine to Him, drank wine, shared wine.  Later that night, I wrote about my experience:
Dionysos is the god of nowness, the god of this moment. Nature itself is vibrating, breathing, exploding, ecstatic with energy all the time. He is not just the next time you drink wine or the next time you dance, he is the intense and tragic-wonderful experience of being alive NOW that is simply waiting for your awareness. What is your greatest joy and your greatest sorrow right now?  He is in both.
I smoked a little leaf of diviner's sage.  I sensed the vastness behind the nature I knew, the death behind the life.  There was a glimmer of fear, but only a glimmer reserved for the unknown, for the overwhelming idea of "void".  But that only pushed me more into a feeling of deep love.  Somewhere around this time, I realized that I'd been digging my fingers into the soft soil and squeezing it through my fingers, over and over and over, with all this love and sorrow pouring through me.
Myself as a priestess of now, of the present moment. Overwhelming love for this earth, its physicality, its dimension and sensations and beauty. This is why I am a Dionysian, why I would be a Bodhisattva -- I would wish always to return to this.
Dionysos' associations with nymphs, with nature, and with death all coalesced into this sudden, half-drunk idea that some nymphs are simply maenads who wished to remain forever connected with the wild places they love, who were granted this by the god they love. 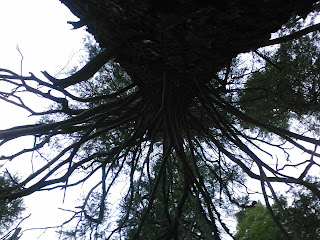 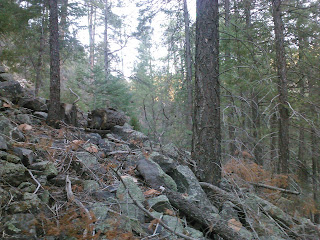 I stayed as long as I could, until it started getting dark and shivering cold.  I ate at a raw food restaurant in town to ground myself before heading home.
Worth mentioning is that while I was there, I also had this intuitive tickle that there's something I need to explore more deeply in the future regarding the relationship between Ariadne and Dionysos and their complementary roles.  (I don't like that last phrase but I'm having a hard time putting it better.)  Synchronistically, earlier in the day I had stopped very briefly at a new age shop before heading farther north, picked up a single pagan book, and randomly flipped it open to a section on Ariadne.  I have also recently changed my Aphrodite shrine to be a shrine to Ariadne-Aphrodite--but more on that later.
[My thanks to Sannion for being the vessel for the oracle that prompted this trip.]
Posted by Ariadne in Exile at 2:00 AM No comments: