I'll be attending the Many Gods West conference in Olympia this year, for those who may not have heard!  The conference has a really amazing lineup of rituals, panels and presenters.  I've joined the planning group that is putting together an ecstatic ritual to honor Dionysos.  Having the opportunity to participate in something this big for the gods and to be able to worship side by side with friends I've only spoken to online is... well, words cannot say, but I'm beyond thrilled.

There's a few different fundraising things going on for this, for both supplies and costs of getting people there, including clothing you can buy on Cafepress with 2 different designs created by Markos Gage.  One is a thyrsos with a snake in a triangle, which form the first three Greek letters of Dionysos' name, the second is a Starry Bull design. If you're attending, it would be great to wear at the conference. If you're not, it's still a good a way to support the Dionysian ritual we'll be doing and simultaneously add something devotional and snazzy to your wardrobe.

Sannion is offering a few different services that you should definitely take advantage of, if you can.  Also, if you donate $50 or more your name will be included as a blessed benefactor in a small booklet we'll be creating to hand out at the ritual, which will have some devotional prose, art and information about the Bacchic Orphic tradition.

Another divination offering to help with this community effort, is here at Joyous Madness.

I plan to craft some very special pieces to help raise money, as well.  More info about that soon!!

Posted by Ariadne in Exile at 5:44 AM No comments:

An old poem I wrote, for my beautiful desert

I've lived in one place my whole life--a desert valley in Arizona.  Being a native is somewhat unusual, especially in this region.  I'm used to people denigrating the desert as ugly and harsh. People move here for one reason or another and complain, loudly and frequently...  About the heat of course, and things like "there are no seasons" or "there are no trees".  Neither of which are true, of course. They just don't take the time to see.  Which I can understand, if you're used to soft greenery... and if you're homesick.  The desert accentuates homesickness even when you're not sure what you're homesick for, and not many are comfortable with that.

I relate to my home.  I relate to having a disposition which is blunt and sometimes aloof... with a prickly history, which takes time to understand.  Always longing for something, always leaning towards extremes.  My husband, who was also born here, showed me the art of paying attention to the subtleties of the desert.  When the ocotillo blooms, when the toads emerge, how you can tell the season by the scent of the night.  It's not a coincidence that this was also when I learned more about myself than I ever have.

Twilight, and the orphan desert
is thick with remembrance.
The secret wail is born in grey spaces--
the growing shade beneath stunted trees,
the desperate angle of a canyon wall,
All aching for what once formed it.
In the eons behind our eyes,
We never forget our ocean mother.

Rebel child, resentfully creates
things with armor and spines,
things that thirst but survive.
Even the wise were once abandoned ones,
left to elemental weathering.
As each weary stone rests between incarnations,
the night creatures mourn...
"We can do this alone, we can do this alone."

The monsoon rages at the realization--
the most defiant art is still imitation.
Valleys like immense dry seashells will sing
for a searing, sonorous wind,
while serpents contemplate old reflections.
Among venom, thorns, tears and bitter blood,
A pilgrim on his knees prophesies:
We may embody Her graceful evolution.

The rain carries with it such divine stillness.

Sunrise, and on a current of longing,
Two hawks fly swiftly towards the always-sun.

Last Monday and Tuesday was the Hunt Festival for the Thiasos of the Starry Bull.  It’s a brand new festival for our emerging tradition this year, and we came up with some ideas for celebrating based on where it fell in our calendar, since it’s unfixed and, like our month names, based upon divination.  This year, it’s in the springtime right on the tail of Easter in the month of Dionysion (he of Mount Nysa), so an Orphic egg hunt seemed appropriate!

I had been having nudges the week prior to go visit my mountains.  One of these nudges came in the form of a deja vu-like intrusion upon my thoughts while I was at work, which I’d never quite experienced before from the spirits of a place.  Not words or even images exactly, but the total feel of those particular cliffs and skies just washed over me.

The weather in the city and the valley has been getting very warm, so I didn’t quite expect how chilly it would still be up there.  I even found a bank of snow on the winding road up to the rim.  At the top, it was very windy but beautiful.  I went not to the most sacred of places where Ariadne’s festival and my wedding took place, but to the adjacent place where I went on my husband’s birthday after his death… I think of it as a place of turning points for me, and that seemed appropriate on this day.

I hugged the trees and greeted the Mountain Mother.

The location I ended up choosing for a shrine was inside a little grove of baby pine trees.  They reminded me of a small labyrinth because of their meandering configuration.  It also seemed 5-10 degrees warmer there, which seemed like a good sign as well.

From the ground I gathered some moss, pinecones, a piece of blackened wood, shed bark from a pine tree, pine needles, small flowers (there were only a few tiny ones), and some tufts of mullein.  On the piece of wood I placed 2 raw eggs into its natural grooves. The rest I arranged around it into a rough likeness of a bearded image.

There was a precise moment, as I finished setting up the shrine and getting the last supplies, where a felt a shift and the forest was suddenly full of presence. It actually stopped me in my tracks for a moment. 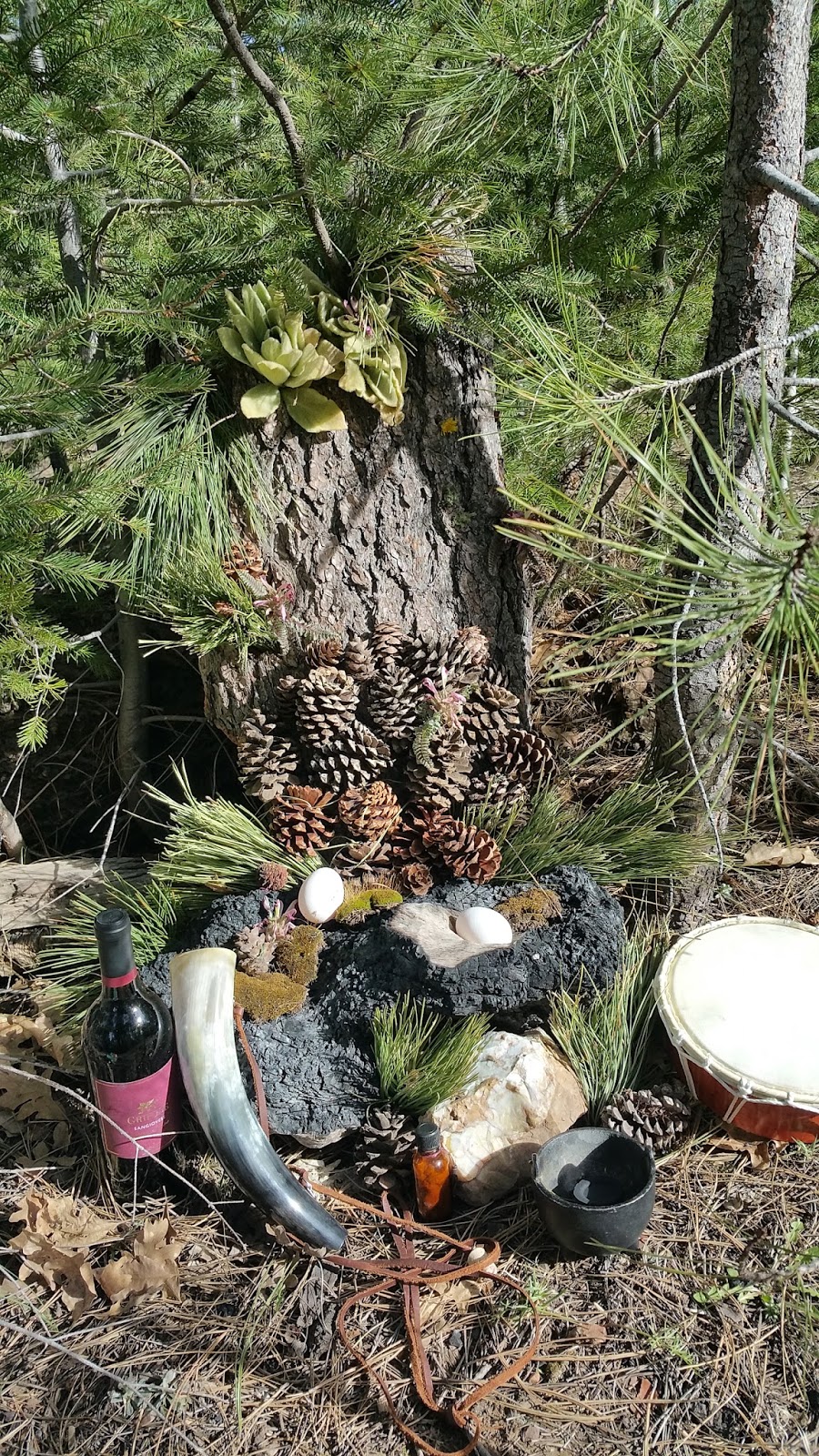 I began by intoning Dionysos’ name.  Over and over.

Then called to him in spontaneous words, heart-driven and flowing, sometime shouting.  As it tends to happen with those bursts of inspiration, I cannot remember them all now but I wish I could.   On the other hand, I feel like their surrender are an offering as much as the wine poured on the ground.  I called on the Mountain Mother next, then offered smoke and libations and toasts of wine to all the gods and spirits of the Starry Bull.  And then to Spider, because one of her children had crawled into my drum as I did this and had to be gently evicted so I could use it to drum up some energy.

Using the dice I consulted the Oracle of Dionysos Bakcheios - I started with 12 slips of paper, one line of oracle for each egg, then once that was completed I felt compelled to do another set so each egg could have 2.  I also created an extra slip of paper that just said “Dionysos”. My thought at the time was that it would add a special significance to that answer and question.

My overturned drum became the vessel from which I could draw the folded slips of paper and distribute them.  Then it was my basket for the eggs themselves.  I smoked some diviner’s sage. 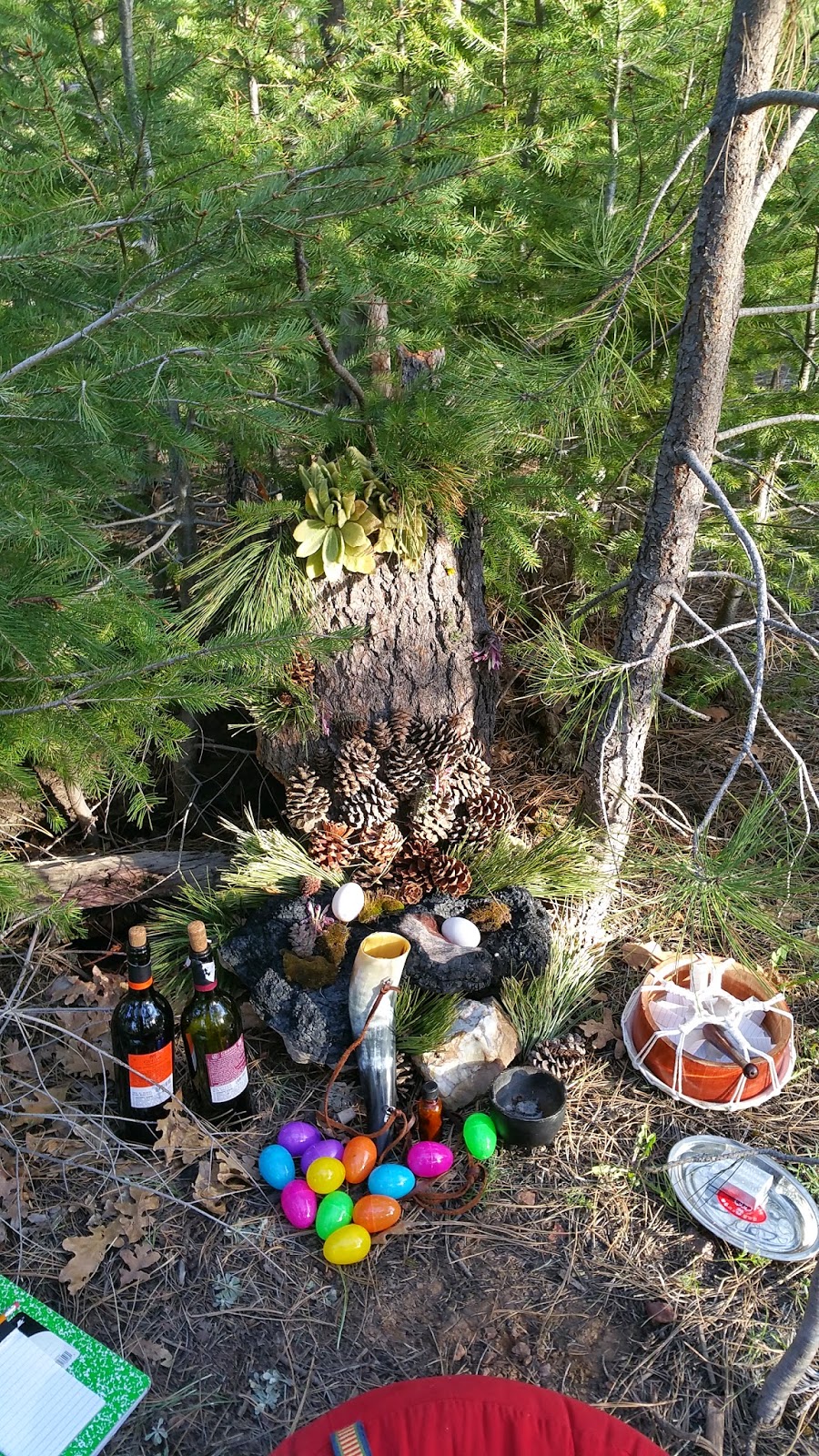 As I hid the eggs, I stayed in a close radius to the shrine and hid them in such a way that they would be in plain sight from the right angle. But I didn’t think too much about this and was definitely in an altered state as I did it.  Back at the shrine, I blew the bull's horn three times. I wrote down a question, asked it aloud, then spun around in a circle and went the direction of whichever way I was facing to search for the answer, choosing the egg I saw first.  Then I would come back to the shrine, open the egg and write down the answer and do it all over again.  But I hid them from myself better than I thought.  It took a really long time to find the 10th egg, and when I did it was the one with Dionysos, so that seemed like a good indication to stop -- especially since the sun was beginning to go down at that point.

Some of the answers were clear, some were less clear for now but even those had definite significance.  The last 2 eggs are still up there somewhere... their answers apparently meant for another time or person.

Before I closed the ritual, I took an extra raw egg I’d brought and rubbed it over my body as I prayed for cleansing, release and healing.  It didn’t start as a chant but it built up into one… until I was shouting and then with one forceful movement broke the egg against the base of the shrine.

I took a picture of the darkening sky before I left. 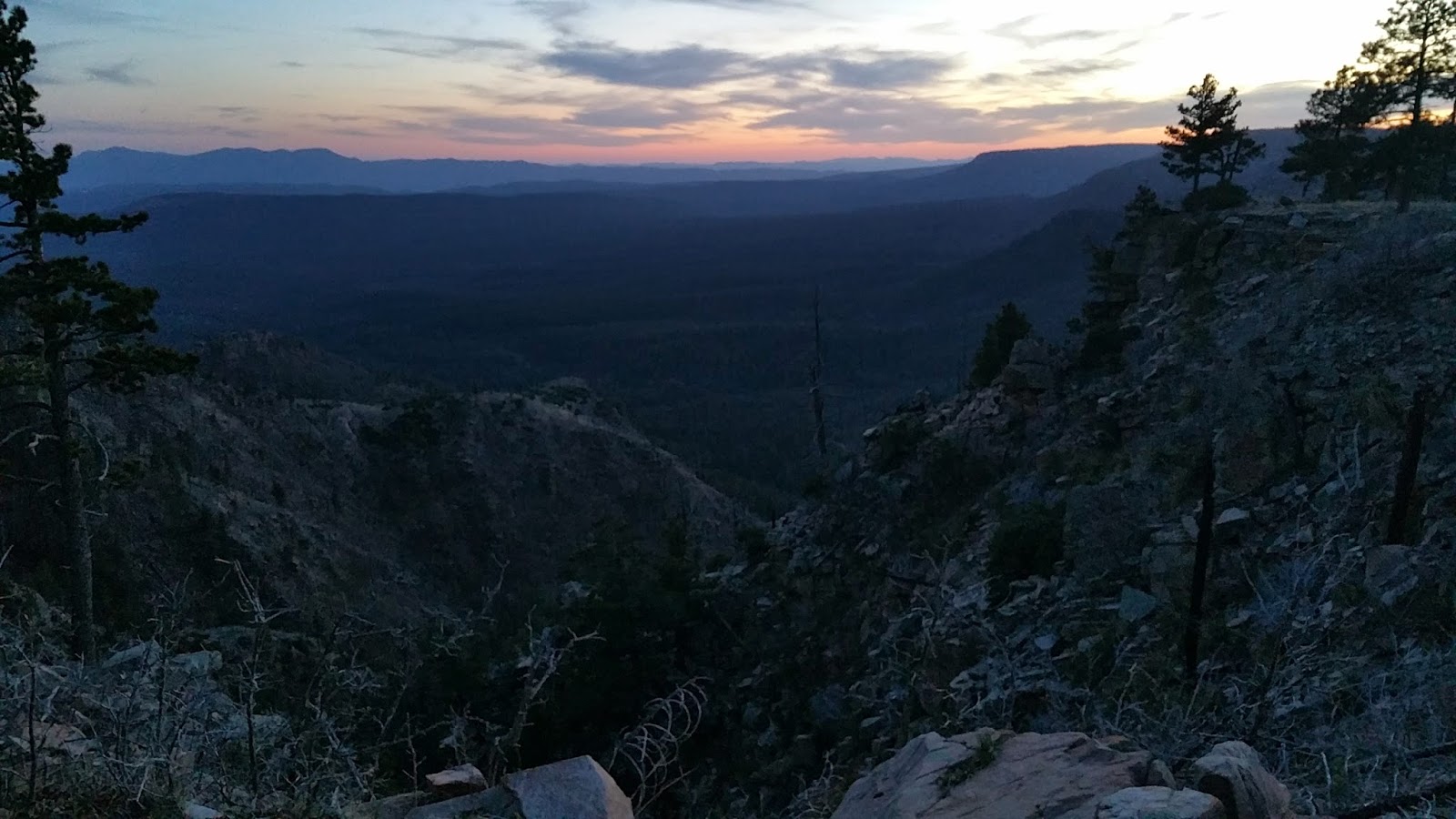 I regretted not staying to see all the stars come out, but I hadn’t brought warm clothes as it was and the temperature was dropping quickly.  But spring has barely begun, and I’m sure I will be drawn back before too long.

Posted by Ariadne in Exile at 10:34 AM No comments: