So I had been chatting with a friend the day before the Lenaia, and mentioned working on some last minute preparations. She said something to the effect of being glad that it was work I was up to doing. It hadn't occurred to me in this context (as being optional) and I said so.  I was running a fever every day of the Anthesteria last year and I was still drinking, gathering flowers outside, trying to do devotional craft work, ritualizing, feasting, drinking more.  She said that was remarkable, but I told her, simply, that I love my god.  And like when you are in love with someone, it's never "enough" at any point, it's an ongoing process of expression and becoming.

I've had friends and family commend me for doing things, in spite of my grief -- for attending concerts, going dancing, seeing plays, traveling, celebrating festivals -- and it's been a really difficult thing to verbalize a response to.  My emotional response might translate to a strangled yell of "how can I not??"  It's not easy, granted, but everything I love demands it. Dionysos demands it. My love for my husband demands it. But not in a demanding way, it's just... these are the things that hold me to this world, that create moments that make life worth it, that put me in touch with who I am and remind me of all that I love and have loved.  I have come across more than one unique complication of being a grieving Dionysian; that's one of them.  There is no luxury of disengagement.

Onto the festival itself...  I love to see plays on the Lenaia; it seems particularly appropriate to this festival.  Although I didn't begin ritually until Monday, I went Sunday night to my favorite local theater, and it was a nice way to ease into the festival.  The play was "Take Me Out" performed by Nearly Naked Theatre.  I'm quite glad I saw it in spite of it being about baseball (I have no interest in sports whatsoever), but it was appropriate in other ways, with its themes of queerness and identity, not to mention a lot of male nudity. I didn't expect the actual showers of water to come falling from above the stage onto the actors during the shower scene -- pretty cool for such a small production!


In the interest of recording my success AND failures, I'll share that Sunday night I tried to get some confirmation via divination on how to proceed with the festival. I had certain activities and ideas in mind, but timing-wise, I wasn't sure about the order.  I tried a couple different decks, re-framed the questions a couple ways, but was unable to get any remotely clear answers. I even threw the dice a couple times to try and get something clearer... nope.  I'm decent at giving readings for friends, but I've never been particularly good at divining on my own behalf. I was still disappointed, as I had hoped a clear purpose and question would have yielded some hints.  I could think of 3 reasons that it didn't. 1) I suck. (Lack of skill or fumbled the session somehow.) 2) The god did not have a preference. 3)  The god wanted me to use my intuition instead.  Whatever the reason, I just went with my intuition and hoped for the best, which in the end seemed fine.

I ought to mention, too, that a few months ago I acquired a new phallos for Dionysos' shrine and ritual use.  The old one was clay, but I had been wanting to find a wood one for some time.  (I also want to hand-carve one of fig wood, but that will be a project for when I encounter a generous and suitable fig tree.)  This one I found on Etsy and knew it was perfect...  It is absolutely stunning. It's made from rowan wood found by the sea.  I have been anointing it and preparing it since before but especially during the Rural Dionysia.

I felt drawn to honor Semele and the nymphs with more emphasis this year.  A major aspect of the Lenaia, for me, is about the love, reciprocity and mystery in the relationships that Dionysos has with women.  So the very first thing I did after setting up the festival altar was give an offering to Semele (benzoin incense), read her a hymn, and ask for her presence.  Then I made a mindful procession to a park a mile away, listening to Daemonia Nymphe the whole time, which definitely put me in an other-ish mindset.  For whatever reason I went to the park to the east instead of the west, which was a longer walk but had me walking towards the moon. When I got to the park I meditated for a bit, poured out milk and honey and burned incense for the nymphs, and read them a hymn.  The sun was setting while I was there.  Perhaps this liminal time added to the strange otherness I was feeling. In spite of the natural setting I had a hard time grounding myself.


Back at home, I prepared for the main ritual and bathed.  I rubbed myself with flying ointment, had some lotus tincture (which subtly intensifies and compliments the effects of wine). The ritual outline itself was very similar to last year's, but the tone was different this year. The raising of energy over the Liknon was more pronounced, more sensual. After the water and wine flowed, I stared longer into the mask... into the space beyond the mask, into the god's presence and non-presence.  I remember speaking to the mask, although I don't remember everything I said.  The music (like last year, on shuffle) was more bizarre, maybe less light-hearted, still meaningful -- it went hand in hand with the sort of emotional roller-coaster I went through staring into that mask.  There was an important message there that I experienced, although I'm not sure how much I can verbalize it.  (A poem, yes, a poem is needed.)  I danced.  I wept heart-wrenchingly one moment, smiled the next.  I danced more.  Later I jotted down, "absyrdity, absurdity, absurdity, life, life, life".

I feasted afterwards, in a daze of drunkenness and post-ritual giddiness, on a variety of locally made and grown foods.  I wound down by watching a comedy routine by Bo Burnham that Sannion recommended on his blog -- I recommend it as well!

The same club that I was lamenting had closed last Lenaia recently re-opened under new management and tentatively reinstated a similar, goth-friendly-themed night with my favorite local DJ.  So a night of devotional dancing was the main order of the evening.  I set my intention that it was all for Him, to stir and arouse Him.  The night was a blur, my body translating music to movement without thought.  If there were dance-floor epiphanies, I don't remember them.  I do remember a moment of gratitude in my abilities, in the time I had taken over the years to hone, through observation and practice, a style of dance that has become very ecstatic, that now flows very easily.  (She can't divine worth a quince, but she can dance at least!)

I almost feel sorry for the people who try to engage me in conversation when I take a breather. No, I'm not new to the scene.  No, I shall not remember your names or faces. I come not for the people. I come for the Dance.

Where I live now, I don't have a natural, semi-wild place in walking distance like I used to.  (Oh river wash, I miss you.)  But I do live only about 10 miles away from the westernmost mountains in the valley, which are the White Tanks.  These are the mountains I can see from my bedroom window.

It proved not very busy on a weekday, and it was not difficult to find a little-used trail and then a place not too far off the trail where I could sit in privacy.  I was surprised at how green things are getting already.  There is the barest carpet of grass that has started to come up on the desert floor, perhaps because we actually had several days of decent rain last month.  The only plants starting to bud any flowers were the jojoba bushes.  Otherwise, no hint yet of the riot of wildflowers we'll get in another month or two.

I nestled myself between a palo verde tree and a cozy mesquite tree with a lattice of branches arching to the ground.  I prepared for some impromptu ritual and more offerings.  My main intention was a challenge that had come to me suddenly, at some point during the festival -- to bring out the liknon basket and phallos from the indoor shrine to the outdoors, in view of the mountains, and to sing to it.  This was a challenge for me for several reasons.  I don't sing, and with the exception of dancing I'm not particularly off-the-cuff spontaneous.  But I did and I was, and if I remember the song I wouldn't tell because some things are best left to mystery.  Here are some pics I took afterwards walking back up the trail. 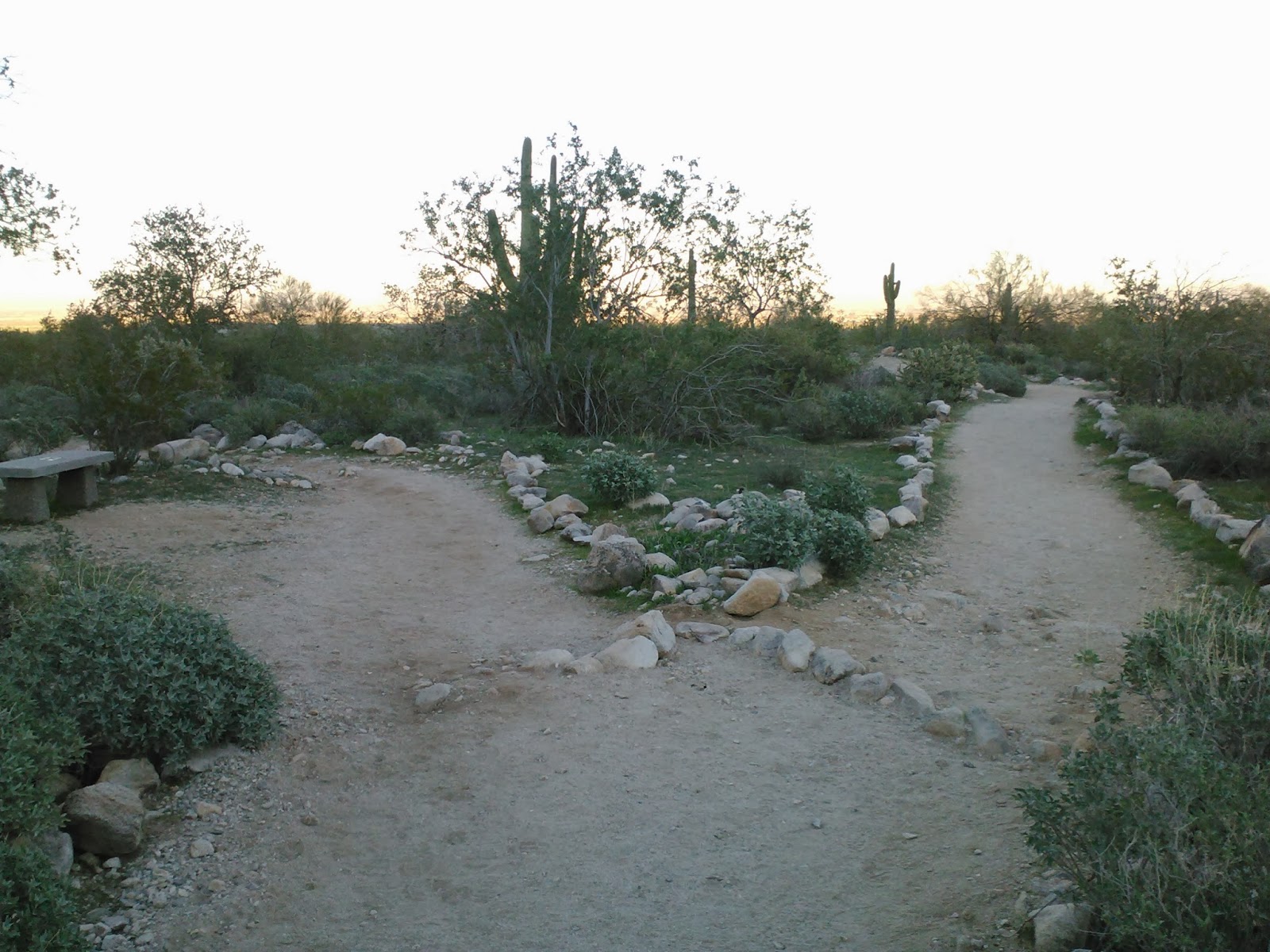 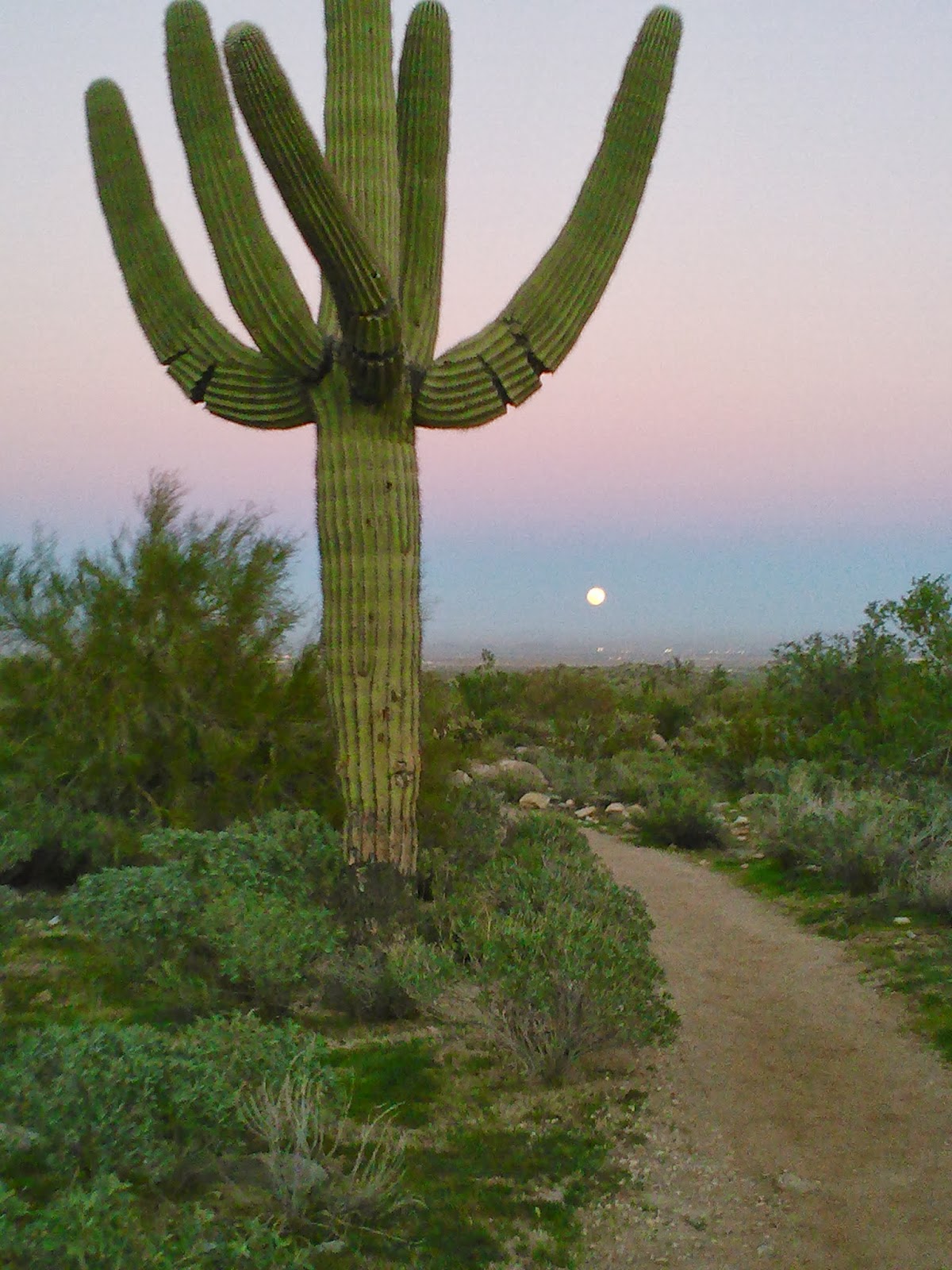 I am still, a week later, feeling a bit raw, still letting everything sink in.  I suspect the feeling will last through Anthesteria.
My heart hurts.
And yet.
The god I love still loves me.
I am full of doubts, because I am human. Yet in the midst of those moments when Dionysos comes there is no room for doubt.

Here are some songs:

The lyrics of this first one, especially, really got to me.

Posted by Ariadne in Exile at 5:59 AM No comments:

Last night I dreamt that I was walking through the jungle of weeds in my backyard at night when I suddenly sank waste deep into the wet ground. I tried to call to my mom, but could not.  I felt a bit absurd, as I couldn't move an inch.  I felt a vague sense of panic start to well up.  Suddenly the ground gave a tremor, I sank a few more inches, and then a few more feet as a chasm started to form.  On the other side of it, was my electric organ and piano.  For a second, I feared that they would fall in and be broken. Then I realized if they did, they would probably fall on me.  Then the earth gaped even wider and I realized I was certainly about to die. Is this not what I wanted?  The musical instruments fell in and we all started to fall.  With a mixture of fear and anticipation, I surrendered.