At the shrine of Ariadne

If you would be balanced, and fully open to Dionysos,
you must know She who is half of the story, His polarity--
Ariadne, most holy.

She will show you how to open your heart to Him,
how to trust,
how to follow the thread
how to stand strong in the face of madness
how to grasp snakes like torches and jump over bulls like a dance...

She cradles his wildness between the vastness of the stars
and the darkness of the underground.

You may see her with wild hair, quiet grace,
and eyes that remind you who you are.

Dionysos rescued Ariadne, yes,
but She also rescued him...
Posted by Ariadne in Exile at 7:22 PM No comments:

St Patrick's Day, Liberalia and the rains after

We had my husband's daughter over for St Patrick's day, and I made a big feast of Irish food.  Corned beef with cabbage and carrots, garlic mashed potatoes, cornbread and a Guinness gingerbread cake.  We adults also had Guinness and pear cider.  They humored me by watching Darby O'Gill and the Little People, an old Disney favorite in my childhood.

I actually didn't realize it was also the Liberalia until a couple days later.  But I was feeling very festive that day.  I've never had a problem with St Patrick's Day. I like many things about the Irish culture, and any holiday that celebrates drinking is fine by me...

I stayed up late that night, reading most of Terence McKenna's True Hallucinations (a synchronous selection that drew my hand to it at the library, not knowing what it was) while the wind blustered outside. I nodded off to strange dreams as the rains finally started.

The next day was a rare and beautiful day... the weather had dropped at least 20 degrees, and the sky seemed closer than ever -- an unusual, vibrant mix of huge white clouds, thunderheads and bright blue sky.  More strangely, some parts of the city saw a good deal of hail, though I didn't see any myself.

AND our morning glory seeds had all sprouted, all 8 little pots of them!

I felt moved to give offerings and commune with Dionysos at my shrine.  I poured out wine, lit incense, hung up the mask I had made on the Anthesteria, and said a few quiet things.  Though before long, I simply walked outside in the rain and sought him there, putting a glass of wine out in the rain to gather rainwater, and feeling that inexplicable gratitude and wonder that comes from being truly present.  I took a sip of the wine and rainwater, then poured it out in small increments into our ivy, cacti and morning glory plants.
A mild, wet spring in the desert?  A blessing indeed!  May the rains keep coming...
Posted by Ariadne in Exile at 2:59 AM No comments:

Here is my account and pictures of this year's Anthesteria.  I realize this is over a month late, but I'm posting it anyway mostly for my own record of things.


Day 1: Pithoigia.  Our Anthesteria altar was even more lovely this year than it was last year. 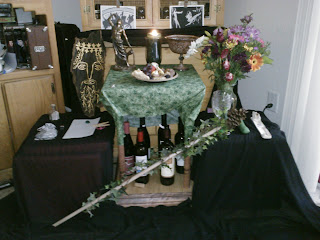 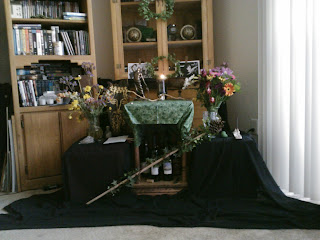 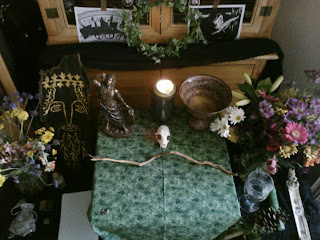 And we had a lot of wonderful wine (though not quite enough, she notes for next year). Among them were 3 Greek wines.  Hermes Naoussa Red Dry Wine 2006, Agiorgitiko Erasmios Red Dry Wine 2007, and Dionysos Merlot 2009.  The others were ones I thought looked good, including a shiraz (Misterio 2010) that had a mask on the label. 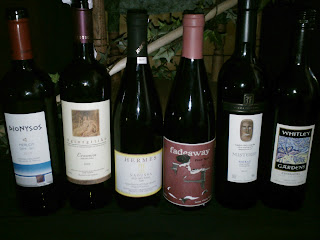 After doing a simple ceremony to begin our Anthesteria celebration, we took a walk along the river wash, bringing with us wine and water.  Although it had been getting warmer in the prior weeks, the weather turned suddenly cold this particular day, as if winter was having one last hurrah.  Of course, "cold" is subjective for us desert-rats. It means a beautiful day where we could wear an extra layer outside.


There is something about taking a walk with an intent or spiritual purpose in mind.  It sharpens your senses and makes everything just a little bit shinier.  Or is that the wine?  Nahhh...  But I was amazed at just how much our little edge of the desert had changed - bursting into bloom and color - seemingly overnight!  Logically, I know this was not the case, I had just not been there recently to witness it, but it still seemed that way.  It was the epitome of spring in our little corner of the world.  Here are some pictures: 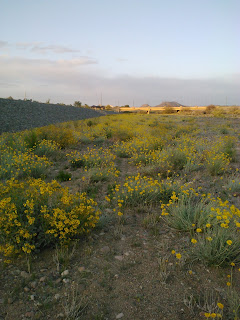 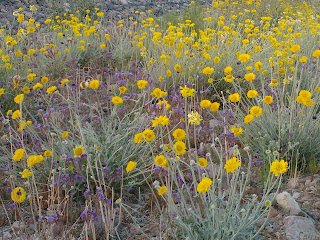 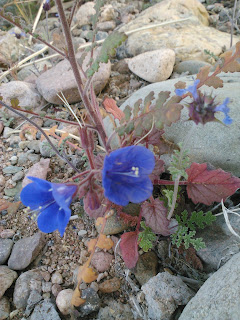 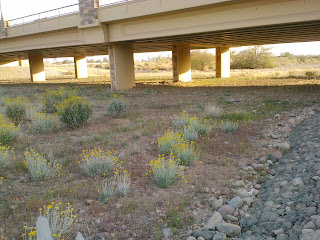 I could smell the orange blossoms, which is one of my favorite scents synonymous with spring.  We explored a creosote "grove" nearby, and were startled with the size of some of them.  Some of them are big Grandmother creosote, reaching over 12 feet high.  (Creosote or chaparral is a favorite plant of ours.  The scent of the resin of its leaves is what, to a person who lives in the desert, smells exactly like a rainy day.  It blooms tiny yellow flowers in spring, and Native Americans used it for its detoxifying properties.  The branches are distinctively light colored, like moonlight, and the wood is extremely hardy.)  It was from one of the Grandmother creosote that my husband found a very large, partially fallen branch to make a stang.  We collected a lot of wildflowers as well.  And we were extremely surprised to stumble across (and recognize) a sacred datura plant, with it's big white trumpet flowers! 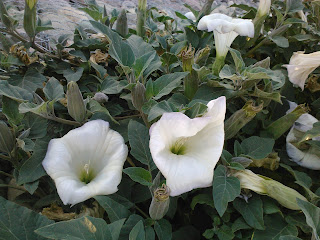 Later, we had a large feast and watched The Doors movie (my first time seeing it, believe it or not, but I loved it.)


Day 2: Khoes.  We observed silence during the day.  My husband finished shaving the bark from his creosote stang, and I made a Dionysos mask that I'm very happy with.  The mask face is very feminine in structure, but I painted it dark green and glued ivy, grapes and moss to it... the whole effect seems powerful and androgynous.  We listened to music, drank wine, celebrated our own creativity and each other. 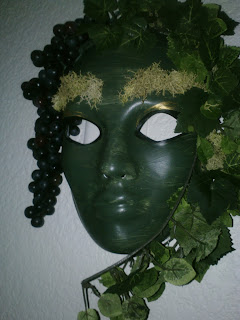 Next year I plan to do a few things differently particularly with Khoes.  Set aside time for solo ritual and devotion.  Ideally, use an entheogen other than or in addition to wine.  Also, let people know that I will be unavailable in advance.  A family member wanting to reach you by phone to tell you something when you're observing a day of silence is problematic, if unavoidable at times.  My suspicions on what this news was was confirmed the next day -- my grandmother who has had cancer had taken a turn for the worse.  (And at the time of me posting this, has since passed on.)


Day 3: Khutroi.  I made a very simple panspermia from pearl barley, goats milk and local honey.  We left some out on our patio for the wandering spirits and took some with us to leave at the cemetery.


At the cemetery, we brought a digital recorder and did an EVP session.  Which might sound silly to some, but with the associations of the day it seemed to us to be appropriate.  Why not give the spirits a chance to speak?  And even if they choose not to, then we have still given them our respectful attention and acknowledgement.  My husband also said an impromptu prayer to Hermes that was lovely, and I am glad we have that recorded as well.  (To date, we still haven't listened to the session, but we will.)  It was strange and sobering being at the cemetery knowing that I would be returning soon, in a matter of days, to bury a family member, even though I am not close to her.


After the sun went down, we tracked down a park with swings.  This was one big thing we did differently this year, doing the swinging on Khutroi instead of Khoes.   (Can't say I have a preference yet.)  The swings we found were in terrible need of being oiled, and they screeched horribly when we tried to swing on them.  But we found that if we swung sideways or in circles, that we could avoid the worst of it.  That turned out to be more fun and appropriate-seeming anyhow, as we made large circles sometimes almost colliding with each other and sometimes making figure eights.  We often looked up at the stars as we swung and I told my husband the story of Erigone, and spoke aloud for the first time my intent to create a festival for Ariadne.  After we finished we walked the perimeter of the park and swung our yarn dolls up into the branches of a tree.


Later, at home, we banished the keres by smudging and sweeping.  I also replaced our old creosote sprigs that had been hung over the doors from last Anthesteria with new ones.
Posted by Ariadne in Exile at 2:59 AM 4 comments:

Way Down Hadestown...
Water to the Dead...
The Hanging Garden...
The End.
Posted by Ariadne in Exile at 3:02 PM No comments:

Eumenides... "This is for madmen only"
The Intimate Stranger...  "We must come together"
I Raise My Cup to Him... "The one who blooms in the bitter snow"
Posted by Ariadne in Exile at 1:58 PM No comments:

Wishing everyone a blessed Anthesteria!  I will be celebrating over the full moon, but wanted to offer up some music on the traditional days.
Invoking Dionysos...
Don't You Want to Be in a Cult?

You Can Never Hold Back Spring...
Posted by Ariadne in Exile at 3:59 PM No comments: