(Dionysos returns from the Underworld - and so does this blog!)

Indulge me while I get a little reflective.  This Lenaia is my ninth. It’s taken on a deep significance to me over the years, and yet I can look at what I wrote of my first observance of it - and it’s all there in the beginning. The essence, the ekstasis, the water and wine, the intense nearness of the god and how it feels between us when we reach this part of the wheel and resonate with each other and across time.

It started very simply and then over the years it turned into a 3 day observance that in some sets the stage for Anthesteria.  In the past, I’ve done a variety of activities: shaved my head, gone dancing, attended plays, visited vineyards, watched movies, taken walks or processions or longer nature journeys, prepared big feasts, etc.  I celebrated with my husband for a couple precious years, but usually I was alone.

This was my first Lenaia since moving to Vermont, and I had to scale it back to one day this year.  And unfortunately, I had to cancel any going-out activities due to getting sick and the state getting hit by the first big snowstorm of the year with wind chills below -20 degrees.  So I felt a little saddened but still determined to perform my ritual for the festival. As wonderful as all the other things can be and have been, the ritual is the core of it. I’ve performed a nearly unchanged version of my current Lenaia ritual for 7 years now.  I’m a little amazed that so much has changed in my life since that first Lenaia -- I’ve moved 5 time (twice uprooting my life and moving across country), I’ve experienced the deepest loss I can imagine, gone through a great deal of personal change, experienced initiations of more than one kind --  and yet, somehow, that one simple ritual is still so fucking powerful.

Small amendments were made.  I have much less space now than I used to.  No makeshift pillar. I also didn’t have the painted tree-bark mask I’ve used to represent Dionysos’ eternal aspect, it being perhaps someplace in storage.  So I took a different one, more green-man like, and after fumbling about with ways to set it up I realized that I could just set it in the middle of a potted ivy plant I’d been keeping since solstice, which is growing in a wheel-shape and has lights on it. The effect was so perfect, it was like it was meant to be. 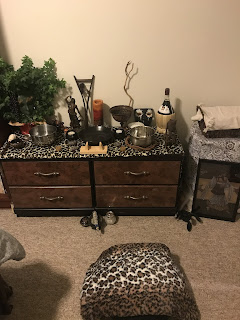 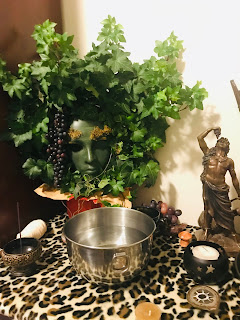 The bay leaf I used to make khernips had noticeable lightning bolt shape cracks through it. I called on Semele and the nymphs and nurses. I called to Dionysos, and rattled and chanted over the veiled liknon until goosebumps cascaded over my skin and the energy peaked. I anointed the phallos within with melted snow.  I ceremonially mixed the water and wine.

Then I set my ipod of over 3700 songs on shuffle - asking Him to choose what he would have me dance to.  And like always, the songs were startling in their appropriateness, forming a dialogue between us. Not solely in the lyrics, but also in associations, personal significance, and tone.

I used no other entheogen other than water mixed with wine.  And still Dionysos was so present. His love so palpable. There was something about accepting that experience in its fullness that was akin to welcoming madness.

My own wildness met the ivy.  My face. His face. My beloved.  I am so blessed! It seems I always end up mixing my tears with the water at some point.  In this state of communion, I asked about the challenges of the last year, the “why’s” weighing on my heart… I think I knew the answer already, but it was nice to hear.

I scryed in the wine bowl until I felt like its darkness was merging with me, as if I was staring into my own depths instead.  Was I the bowl? Aren’t I just a vessel, filled with water and wine? I felt Esoptron quite strongly throughout the evening. There was a full length mirror in my room, and in my trance states I kept mistaking the candlelight shadow of the offering bowl on the wall for another mirror or portal or image of some kind.

After dancing, I feasted and set out food offerings.  The day before, because of being ill, I had lost my sense of taste and the same foods had been bland and boring. But now, with Dionysos present, I could taste everything again suddenly, will all its holy life-force and sensual vibrancy.  If that’s not a metaphor for the god, I don’t know what is.

Lenaia is all about trust and faith...  In the dream of spring in winter. In the God Who Comes.  In the vital reciprocity between us and the divine. May this gnosis find its home in your heart as well.


Music:
Within You by David Bowie
The White Beyond by Thoushaltnot
“And when I breathe away my strength
I'll find you in the white beyond
And from above, we'll make the rain
To water mortal dreams at night”
The Way You Are by 46Bliss
“I like to look into your eyes where
Water's warm, feels like home
Travel fast, the seconds last
For days, this haze I'm in…
Put yourself in my place.”
If You’re A wizard Then Why Do You Wear Glasses? by the Liars
“Out of the bushes / A girl
It's getting cold / Outside
...I would drink the water
I would drink the water
...We can break it down, witches!”
Intimate Stranger by Android Lust
“We are bound we must be found
We are the way to heaven
We're still in the dark but we breathe as one
We must come together
I am water / I am fire
I am aether / I am your answer
I am the seeker / The righteous soldier
The unbeliever / The intimate stranger”
What God Intended by Gary Numan
To Be Alone with You by Sufjan Stevens
Minuit by Perturbator
In a Dark Place by Gary Numan
Kisses 3 by The Cruxshadows
Climbing Up the Walls by Radiohead
“I am the key to the lock in your house
That keeps your toys in the basement
And if you get too far inside
You'll only see my reflection”
Madness in Men by Android Lust
The Greater Good by Thoushaltnot
“For now a deity I stand
Before my judged and blackened kin
Save only one, a different face
Was cleared of her new virgin skin”
Vito’s Ordination Song by Sufjan Stevens
“I always knew you / In your mother's arms
I have called her name / I've an idea
Placed in your mind / To be a better man,
I've made a crown for you / And put it in your room
And when the bride groom comes / There will be noise.
And there will be glad / And the perfect bed”
Shape of Things by Operators
“I got my voice, I'm calling
Across the wild, are you receiving?
Signal in the dark…
And I was born just like you
Born to let them go, just like you”
Epigram by Tycho
Child-Heart Losers by Sunset Rubdown
“There's a child heart in the child
There’s a child heart in the child
Living wild oh
La la la la la
Fire makes it go…”
Q-Chord by Sunset Rubdown
Street Spirit [Fade Out] by Radiohead
“Be a world child, form a circle
Before we all go under
And fade out again and fade out again
...Immerse your soul in love”
15 Step  by Radiohead
“How come I end up where I started?
How come I end up where I went wrong?
Won't take my eyes off the ball again
You reel me out, then you cut the string”
Modern Drummer by The American Analog Set