I stumbled across a Bulgarian artist named Peter Velikov.  His art is mostly etchings, and he has some unique takes on classical themes and figures.  He has two pieces of Ariadne and Dionysos.  The first, my favorite, is called "Bacchus and Ariana": 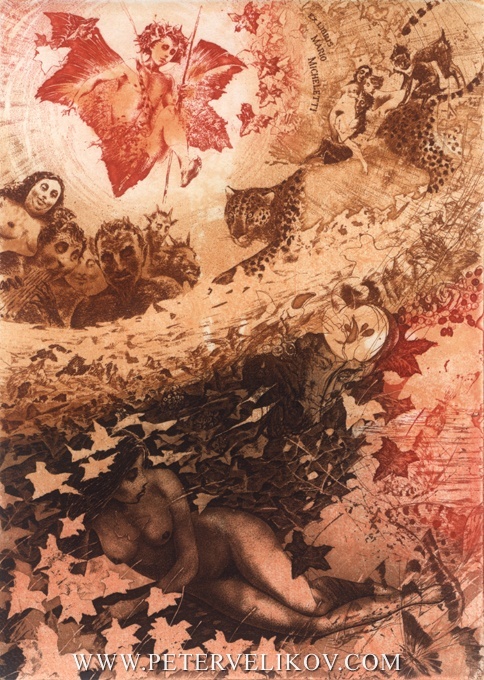 And the second is "Bacchus and Ariadne": 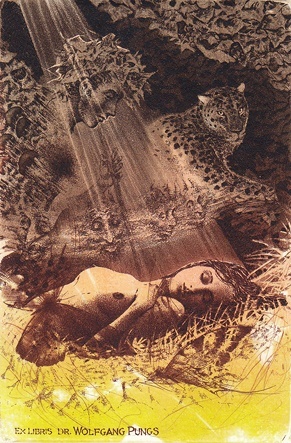 The other Dionysian art I wanted to pass along is actually a film, called Holy Motors, which I had the privilege of seeing at our favorite local independent movie theater/bar.  (Great combination!)   It's a French film that premiered at this year's Cannes Film Festival.  I'm afraid no synopsis of the movie is going to do it justice, but it is weird and beautiful and we were talking about it for a long time after seeing it.  What about it is Dionysian?  Masks, drama, performance, life, the dissolution of boundaries -- all bleeding together, and a lot of other details which I'll leave you to discover.  The (very talented) actor who plays the main character has no less than 11 personas in the film.  Kylie Minogue also has a role.  I will definitely be buying it when it comes out on DVD, as I already want to see it again.  If anyone reading this ends up seeing it, definitely let me know what you think!  Here is the trailer: